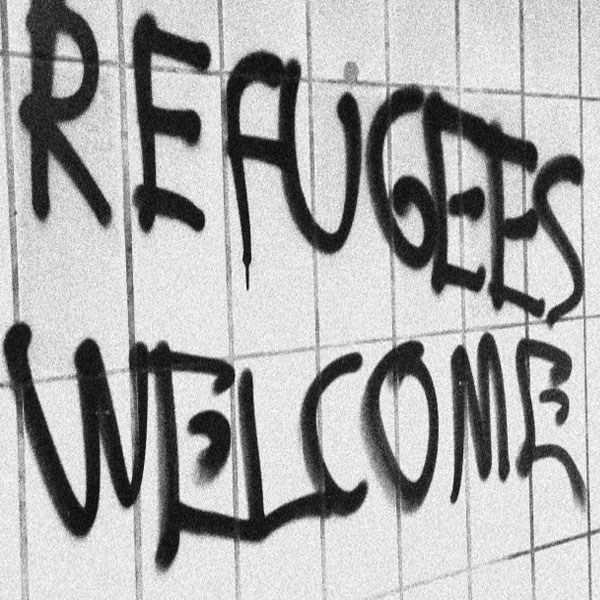 They say there are three steps to homelessness. So how many steps are there to refugee status? As we witness the humanitarian disaster on our doorstep its not hard to imagine how few you or I would have to take to be where so many are today.

The city I call home is dragged into war. Vital services grind to halt. The gas, the leccy, the water, the NHS, it all stops as the horror of war creeps ever nearer. I can’t access the prescription medicine I need to stay sane. The young people my partner works with can’t get to school or access the daily services they need. Public transport stops. Communication with the outside world breaks down. I can’t charge my phone, I can’t get online. The shops are empty of provisions and what savings we do have are rapidly diminishing as we feed the black market to feed ourselves. My history as a campaigner, my neighbourhood’s knowledge of my sexuality marks me out for rape, torture or worse. We hear stories of gay male friends thrown to their deaths from high rise towers, lesbians stoned to death. We gather with neighbours and friends desperate in the knowledge that our families and friends are facing journeys none of us want to make.We sell our belongings as we begin to plan our escape. Young men and women, nieces and nephews, the sons and daughters of our friends have left, fighting for a freedom deemed worthless by the wider world.

And then the snipers arrive, the bombs fall, the gas poisons and life becomes beyond unbearable. Loved ones lost in a war we had no say in. Control given to those who wish to wipe us off the planet. We are the wrong religion, the wrong sex, the wrong sexuality, the wrong people in the wrong place. In little more than four years our city, just like so many others across the country, has become a shell, filled with the stench of death. We have lost all hope of living as we once did. And so we run. Abandon what little we have left, the sick, disabled and elderly unable to make the journey left behind with brave NCO’s, pets alone to fend for themselves, the shell of our home abandoned as we leave our pride and dignity behind and run. Run to further hardship, to cruel traffickers, to boats we once saw lining the souvenir beachside shops, to right wing protestors set on sending us back from where we came from, to terrifying journeys across the Med, to trucks filled with the desperate, to railway stations and nights slept outside, to European countries determined to ignore or contain us, to camps where hope is no more. To a continent so fearful of us, they question if we have the right to the life they have.

But we weren’t born in Syria, Somalia, Iraq, Pakistan or Eritrea, and however great our imagination may be war on the streets of the United Kingdom won’t happen in our lifetime. We won’t be hunted down or bombed out of our houses because of who we love, who we believe in, where we live or the tribe we belong to. But? But then again I never thought in my lifetime I’d see trains rammed with the frightened, the labelled, the unwanted. I never thought the images reminiscent of 1930s Pathe News footage would be repeated in excruciating high definition on my TV in 2015.

In 2015. This is happening now and we mustn’t look away. Its time to petition, email and tweet your MP, donate, fundraise, support, welcome refugees and shame our government into making a change. If we lead others will follow. If Cameron leads (as one would hope a Prime Minister would do) others will follow. Offering sanctuary to 4000 of the (unrealistic) estimate of 160,000 fleeing refugees between 25 of the EU’s 28 countries is not enough.

Don’t let the steps refugees from Syria, Somalia, Iraq, Pakistan or Eritrea take be ones they have to take alone. Stand beside them. Stand together and make a change. And challenge those who say this is not our problem, that we don’t have the room, the infrastructure or the resources to help. We do. Because there for the grace of a few steps go we.